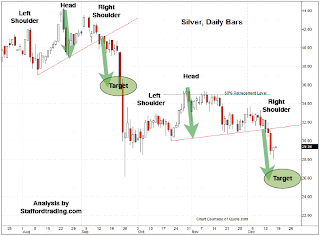 “Never to get married to a position.” That is tough advice for a gold and silver bug who has had a profitable 10 year run.
Silver’s first Head and Shoulders Top in the summer proved this point.  A price target of $36 was forecast by the September 12 breakdown.  This was hit, and then some.
Another, longer Head and Shoulders top broke the Neck line on December 12.  This forecast a price target of $26.  Right at the September low.  This is right around the 50 percent level of the high reached in late April, 2011
After the last leg down, price retraced to the 50 percent level.  This forecast a 50 percent likelihood of the old low being broken.
Bottom Line, it is too early to get long Silver here. 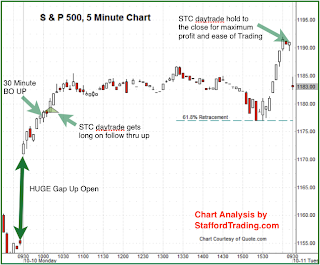 The “key” to this chart is that the previous action in the market was strongly up.  Three strong days up followed by a NR day.  Yesterday was a Narrow Range(NR) / Congestion bar.  Which way will the market go out of the NR day?
A huge gap up open tells us - UP!  This gap had IMMEDIATE follow thru.  Look to get long.  We don’t recommend trading for the first 30 to 60 minutes of the trading day.  At 10:00, price had a 30 minute breakout up.  Stafford Daytrade got long on the confirmation of this 30 minute breakout shortly thereafter at a price of 1179.80. A new high above the 30 minute breakout bar ensues.
After some positive follow through, price congest.  Expect a long congestion and potential deep reaction based on the big move thus far.  Traders needs to “digest” such a big move.  Sure enough, price goes sideways from 10:45 to 2:30.  Then the afternoon Counter-Trend move happens.  This carries exactly to the 68% retracement level of the move from the open of the day.  Stafford Daytrade’s stop loss was loose enough to NOT get hit.  After the afternoon Counter-Trend move, our unique trailing stop feature will “kick in” and hopefully protect profits.
The “big boys” come in and drive the market much higher in last half hour of the day.  How could they NOT?  If the “big boys” weren’t long coming into today, they have to make darn sure they are long going out of the day.  Stafford Daytrade exited it’s long trade at the close of 1190.90.  A profit of 11.10 on this trade.  OVER $2500 on one big SP or about $500 per e-mini. PAST PERFORMANCE IS NOT NECESSARILY INDICATIVE OF FUTURE RESULTS.  ALL RESULTS ARE HYPOTHETICAL.
Posted by Lundy Hill at 1:48 PM No comments:

Lundy Hill
Charlotte, nc, United States
After receiving a degree in Electrical and Computer Engineering, Lundy started work at Cape Canaveral working on the Space Shuttle program. But, the draw of the markets was too great. He joined his famous trading family in the family business. He runs a commodity futures brokerage company and started his own trading company, StaffordTrading.com, managing private equity and teaching people how to trade.